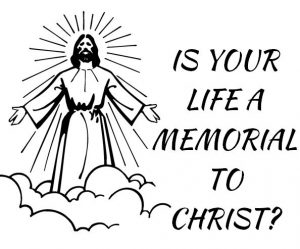 EXODUS 13:14
And it shall be when your son asks you in time to come, saying, ‘What is this?’ then you shall say to him, ‘With a powerful hand the Lord brought us out of Egypt, from the house of slavery.

MARK 14:8-9
She has done what she could; she has anointed My body beforehand for the burial. Truly I say to you, wherever the gospel is preached in the whole world, what this woman has done will also be spoken of in memory of her.”

LUKE 22:19
And when He had taken some bread and given thanks, He broke it and gave it to them, saying, “This is My body which is given for you; do this in remembrance of Me.”