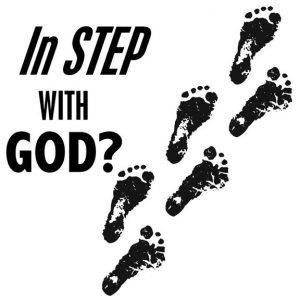 MATTHEW 6:33
But seek first His kingdom and His righteousness, and all these things will be added to you.

GALATIANS 5:16
But I say, walk by the Spirit, and you will not carry out the desire of the flesh.

JAMES 1:22
But prove yourselves doers of the word, and not merely hearers who delude themselves.

SCRIPTURE TEXT—JOSHUA 5:1-12
Now it came about when all the kings of the Amorites who were beyond the Jordan to the west, and all the kings of the Canaanites who were by the sea, heard how the Lord had dried up the waters of the Jordan before the sons of Israel until they had crossed, that their hearts melted, and there was no spirit in them any longer because of the sons of Israel.

Now when they had finished circumcising all the nation, they remained in their places in the camp until they were healed. Then the Lord said to Joshua, “Today I have rolled away the reproach of Egypt from you.” So the name of that place is called Gilgal to this day.

While the sons of Israel camped at Gilgal they observed the Passover on the evening of the fourteenth day of the month on the desert plains of Jericho. On the day after the Passover, on that very day, they ate some of the produce of the land, unleavened cakes and parched grain. The manna ceased on the day after they had eaten some of the produce of the land, so that the sons of Israel no longer had manna, but they ate some of the yield of the land of Canaan during that year.

Then you will call on me and come and pray to me, and I will listen to you.
Jeremiah 29:12