Class Time Is Over 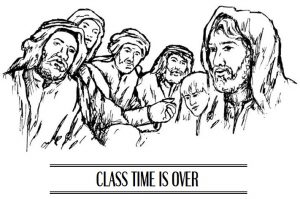 CLASS TIME IS OVER

HEBREWS 5:11-14
Concerning him we have much to say, and it is hard to explain, since you have become dull of hearing. For though by this time you ought to be teachers, you have need again for someone to teach you the elementary principles of the oracles of God, and you have come to need milk and not solid food. For everyone who partakes only of milk is not accustomed to the word of righteousness, for he is an infant. But solid food is for the mature, who because of practice have their senses trained to discern good and evil.

SCRIPTURE TEXT—LUKE 9:1-10
And He called the twelve together, and gave them power and authority over all the demons and to heal diseases. And He sent them out to proclaim the kingdom of God and to perform healing. And He said to them, “Take nothing for your journey, neither a staff, nor a bag, nor bread, nor money; and do not even have two tunics apiece. Whatever house you enter, stay there until you leave that city. And as for those who do not receive you, as you go out from that city, shake the dust off your feet as a testimony against them.” Departing, they began going throughout the villages, preaching the gospel and healing everywhere.

Now Herod the tetrarch heard of all that was happening; and he was greatly perplexed, because it was said by some that John had risen from the dead, and by some that Elijah had appeared, and by others that one of the prophets of old had risen again. Herod said, “I myself had John beheaded; but who is this man about whom I hear such things?” And he kept trying to see Him.

When the apostles returned, they gave an account to Him of all that they had done. Taking them with Him, He withdrew by Himself to a city called Bethsaida.

But the crowds were aware of this and followed Him; and welcoming them, He began speaking to them about the kingdom of God and curing those who had need of healing.