*PLEASE NOTE: Due to technical difficulties, no audio is available for this sermon other than the scripture readings. 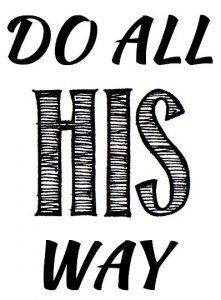 I CORINTHIANS 10:31
Whether, then, you eat or drink or whatever you do, do all to the glory of God.

EPHESIANS 6:10-11
Finally, be strong in the Lord and in the strength of His might. Put on the full armor of God, so that you will be able to stand firm against the schemes of the devil.

JAMES 1:22
But prove yourselves doers of the word, and not merely hearers who delude themselves.

SCRIPTURE TEXT
JOSHUA 8:1-13
Now the Lord said to Joshua, “Do not fear or be dismayed. Take all the people of war with you and arise, go up to Ai; see, I have given into your hand the king of Ai, his people, his city, and his land. You shall do to Ai and its king just as you did to Jericho and its king; you shall take only its spoil and its cattle as plunder for yourselves. Set an ambush for the city behind it.”

So Joshua rose with all the people of war to go up to Ai; and Joshua chose 30,000 men, valiant warriors, and sent them out at night. He commanded them, saying, “See, you are going to ambush the city from behind it. Do not go very far from the city, but all of you be ready. Then I and all the people who are with me will approach the city. And when they come out to meet us as at the first, we will flee before them. They will come out after us until we have drawn them away from the city, for they will say, ‘They are fleeing before us as at the first.’ So we will flee before them. And you shall rise from your ambush and take possession of the city, for the Lord your God will deliver it into your hand. Then it will be when you have seized the city, that you shall set the city on fire. You shall do it according to the word of the Lord. See, I have commanded you.” So Joshua sent them away, and they went to the place of ambush and remained between Bethel and Ai, on the west side of Ai; but Joshua spent that night among the people.

Topics: faithfulness, Joshua
« Let Not Your Hearts Be Troubled Ambush »