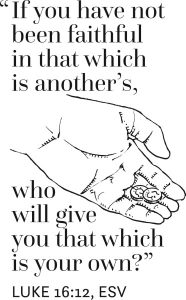 LUKE 21:1-4
And He looked up and saw the rich putting their gifts into the treasury. And He saw a poor widow putting in two small copper coins. And He said, “Truly I say to you, this poor widow put in more than all of them; for they all out of their surplus put into the offering; but she out of her poverty put in all that she had to live on.”

MATTHEW 6:33
But seek first His kingdom and His righteousness, and all these things will be added to you.

SCRIPTURE TEXT - LUKE 16:1-13
Now He was also saying to the disciples, “There was a rich man who had a manager, and this manager was reported to him as squandering his possessions. And he called him and said to him, ‘What is this I hear about you? Give an accounting of your management, for you can no longer be manager.’ The manager said to himself, ‘What shall I do, since my master is taking the management away from me? I am not strong enough to dig; I am ashamed to beg. I know what I shall do, so that when I am removed from the management people will welcome me into their homes.’ And he summoned each one of his master’s debtors, and he began saying to the first, ‘How much do you owe my master?’ And he said, ‘A hundred measures of oil.’ And he said to him, ‘Take your bill, and sit down quickly and write fifty.’ Then he said to another, ‘And how much do you owe?’ And he said, ‘A hundred measures of wheat.’ He *said to him, ‘Take your bill, and write eighty.’ And his master praised the unrighteous manager because he had acted shrewdly; for the sons of this age are more shrewd in relation to their own kind than the sons of light. And I say to you, make friends for yourselves by means of the wealth of unrighteousness, so that when it fails, they will receive you into the eternal dwellings.

Now the Pharisees, who were lovers of money, were listening to all these things and were scoffing at Him. And He said to them, “You are those who justify yourselves in the sight of men, but God knows your hearts; for that which is highly esteemed among men is detestable in the sight of God.

“The Law and the Prophets were proclaimed until John; since that time the gospel of the kingdom of God has been preached, and everyone is forcing his way into it. But it is easier for heaven and earth to pass away than for one stroke of a letter of the Law to fail.