God Will Supply All Your Needs 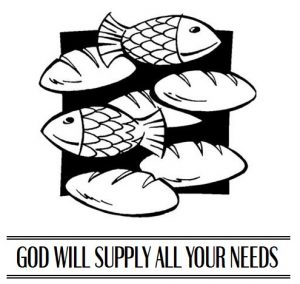 GOD WILL SUPPLY ALL YOUR NEEDS

MATTHEW 6:25-33
“For this reason I say to you, do not be worried about your life, as to what you will eat or what you will drink; nor for your body, as to what you will put on. Is not life more than food, and the body more than clothing? Look at the birds of the air, that they do not sow, nor reap nor gather into barns, and yet your heavenly Father feeds them. Are you not worth much more than they? And who of you by being worried can add a single hour to his life? And why are you worried about clothing? Observe how the lilies of the field grow; they do not toil nor do they spin, yet I say to you that not even Solomon in all his glory clothed himself like one of these. But if God so clothes the grass of the field, which is alive today and tomorrow is thrown into the furnace, will He not much more clothe you? You of little faith! Do not worry then, saying, ‘What will we eat?’ or ‘What will we drink?’ or ‘What will we wear for clothing?’ For the Gentiles eagerly seek all these things; for your heavenly Father knows that you need all these things. But seek first His kingdom and His righteousness, and all these things will be added to you.

SCRIPTURE TEXT—LUKE 9:11-17
But the crowds were aware of this and followed Him; and welcoming them, He began speaking to them about the kingdom of God and curing those who had need of healing.

And it happened that while He was praying alone, the disciples were with Him, and He questioned them, saying, “Who do the people say that I am?” They answered and said, “John the Baptist, and others say Elijah; but others, that one of the prophets of old has risen again.” And He said to them, “But who do you say that I am?” And Peter answered and said, “The Christ of God.” But He warned them and instructed them not to tell this to anyone, saying, “The Son of Man must suffer many things and be rejected by the elders and chief priests and scribes, and be killed and be raised up on the third day.”

And He was saying to them all, “If anyone wishes to come after Me, he must deny himself, and take up his cross daily and follow Me. For whoever wishes to save his life will lose it, but whoever loses his life for My sake, he is the one who will save it. For what is a man profited if he gains the whole world, and loses or forfeits himself? For whoever is ashamed of Me and My words, the Son of Man will be ashamed of him when He comes in His glory, and the glory of the Father and of the holy angels. But I say to you truthfully, there are some of those standing here who will not taste death until they see the kingdom of God.”

Topics: feed the crowd, fish and loaves, Jesus Christ, provision, worry
« Home Church: The “One Another” Finale! What Are You Going to Do About It? »