He Is Worthy To Be Worshiped 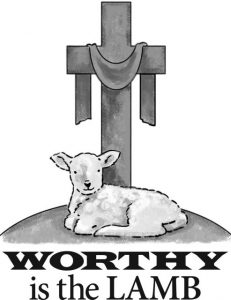 HE IS WORTHY TO BE WORSHIPED

And I saw between the throne (with the four living creatures) and the elders a Lamb standing, as if slaughtered, having seven horns and seven eyes, which are the seven spirits of God sent out into all the earth. And He came and took the scroll out of the right hand of Him who sat on the throne. When He had taken the scroll, the four living creatures and the twenty-four elders fell down before the Lamb, each one holding a harp and golden bowls full of incense, which are the prayers of the saints. And they *sang a new song, saying,

“Worthy are You to take the scroll and to break its seals; for You were slaughtered, and You purchased people for God with Your blood from every tribe, language, people, and nation.

You have made them into a kingdom and priests to our God, and they will reign upon the earth.”

Then I looked, and I heard the voices of many angels around the throne and the living creatures and the elders; and the number of them was myriads of myriads, and thousands of thousands, saying with a loud voice,

“Worthy is the Lamb that was slaughtered to receive power, wealth, wisdom, might, honor, glory, and blessing.”

“To Him who sits on the throne and to the Lamb be the blessing, the honor, the glory, and the dominion forever and ever.”

And the four living creatures were saying, “Amen.” And the elders fell down and worshiped.

FEATURED VIDEO: Is He Worthy? by West Coast Choir

At that very time some Pharisees approached, saying to Him, “Go away and leave this place, because Herod wants to kill You.” And He said to them, “Go and tell that fox, ‘Behold, I am casting out demons and performing healings today and tomorrow, and on the third day I reach My goal.’ Nevertheless I must go on My journey today and tomorrow and the next day; for it cannot be that a prophet would perish outside Jerusalem. Jerusalem, Jerusalem, the city that kills the prophets and stones those who have been sent to her! How often I wanted to gather your children together, just as a hen gathers her young under her wings, and you were unwilling! Behold, your house is left to you desolate; and I say to you, you will not see Me until you say, ‘Blessed is the One who comes in the name of the Lord!’”