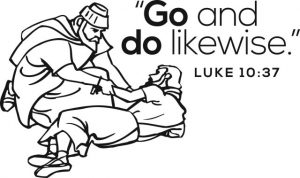 I JOHN 3:16-18
We know love by this, that He laid down His life for us; and we ought to lay down our lives for the brethren. But whoever has the world’s goods, and sees his brother in need and closes his heart against him, how does the love of God abide in him? Little children, let us not love with word or with tongue, but in deed and truth.

JAMES 4:17
Therefore, to one who knows the right thing to do and does not do it, to him it is sin.

SCRIPTURE TEXT—LUKE 10:30-37
Jesus replied and said, “A man was going down from Jerusalem to Jericho, and fell among robbers, and they stripped him and beat him, and went away leaving him half dead. And by chance a priest was going down on that road, and when he saw him, he passed by on the other side. Likewise a Levite also, when he came to the place and saw him, passed by on the other side. But a Samaritan, who was on a journey, came upon him; and when he saw him, he felt compassion, and came to him and bandaged up his wounds, pouring oil and wine on them; and he put him on his own beast, and brought him to an inn and took care of him. On the next day he took out two denarii and gave them to the innkeeper and said, ‘Take care of him; and whatever more you spend, when I return I will repay you.’ Which of these three do you think proved to be a neighbor to the man who fell into the robbers’ hands?” And he said, “The one who showed mercy toward him.” Then Jesus said to him, “Go and do the same.”

Now as they were traveling along, He entered a village; and a woman named Martha welcomed Him into her home. She had a sister called Mary, who was seated at the Lord’s feet, listening to His word. But Martha was distracted with all her preparations; and she came up to Him and said, “Lord, do You not care that my sister has left me to do all the serving alone? Then tell her to help me.” But the Lord answered and said to her, “Martha, Martha, you are worried and bothered about so many things; but only one thing is necessary, for Mary has chosen the good part, which shall not be taken away from her.”