VIDEO: View without leaving our website! **FYI: This video has a small glitch about the 26+ minute mark due to a 1-2 minute file corruption that had to be edited out, otherwise it plays just fine. 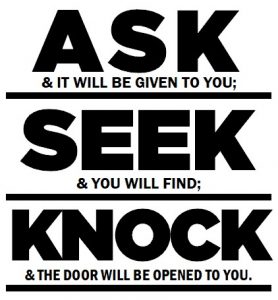 MATTHEW 15:21-28
Jesus went away from there, and withdrew into the district of Tyre and Sidon. And a Canaanite woman from that region came out and began to cry out, saying, “Have mercy on me, Lord, Son of David; my daughter is cruelly demon-possessed.” But He did not answer her a word. And His disciples came and implored Him, saying, “Send her away, because she keeps shouting at us.” But He answered and said, “I was sent only to the lost sheep of the house of Israel.” But she came and began to bow down before Him, saying, “Lord, help me!” And He answered and said, “It is not good to take the children’s bread and throw it to the dogs.” But she said, “Yes, Lord; but even the dogs feed on the crumbs which fall from their masters’ table.” Then Jesus said to her, “O woman, your faith is great; it shall be done for you as you wish.” And her daughter was healed at once.

PSALM 84:11-12
For the Lord God is a sun and shield; The Lord gives grace and glory; No good thing does He withhold from those who walk uprightly. O Lord of hosts, How blessed is the man who trusts in You!

SCRIPTURE TEXT—LUKE:11:5-13
Then He said to them, “Suppose one of you has a friend, and goes to him at midnight and says to him, ‘Friend, lend me three loaves; for a friend of mine has come to me from a journey, and I have nothing to set before him’; and from inside he answers and says, ‘Do not bother me; the door has already been shut and my children and I are in bed; I cannot get up and give you anything.’ I tell you, even though he will not get up and give him anything because he is his friend, yet because of his persistence he will get up and give him as much as he needs.

“So I say to you, ask, and it will be given to you; seek, and you will find; knock, and it will be opened to you. For everyone who asks, receives; and he who seeks, finds; and to him who knocks, it will be opened. Now suppose one of you fathers is asked by his son for a fish; he will not give him a snake instead of a fish, will he? Or if he is asked for an egg, he will not give him a scorpion, will he? If you then, being evil, know how to give good gifts to your children, how much more will your heavenly Father give the Holy Spirit to those who ask Him?”