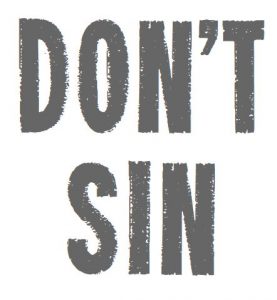 NUMBERS 32:23
But if you will not do so, behold, you have sinned against the Lord, and be sure your sin will find you out.

PSALM 44:21
Would not God find this out? For He knows the secrets of the heart.

LUKE 16:15
And He said to them, “You are those who justify yourselves [a]in the sight of men, but God knows your hearts; for that which is highly esteemed among men is detestable in the sight of God.

GALATIANS 6:7
Do not be deceived, God is not mocked; for whatever a man sows, this he will also reap.

Now Joshua sent men from Jericho to Ai, which is near Beth-aven, east of Bethel, and said to them, “Go up and spy out the land.” So the men went up and spied out Ai. They returned to Joshua and said to him, “Do not let all the people go up; only about two or three thousand men need go up to Ai; do not make all the people toil up there, for they are few.” So about three thousand men from the people went up there, but they fled from the men of Ai. The men of Ai struck down about thirty-six of their men, and pursued them from the gate as far as Shebarim and struck them down on the descent, so the hearts of the people melted and became as water.

Then Joshua tore his clothes and fell to the earth on his face before the ark of the Lord until the evening, both he and the elders of Israel; and they put dust on their heads. Joshua said, “Alas, O Lord God, why did You ever bring this people over the Jordan, only to deliver us into the hand of the Amorites, to destroy us? If only we had been willing to dwell beyond the Jordan! O Lord, what can I say since Israel has turned their back before their enemies? For the Canaanites and all the inhabitants of the land will hear of it, and they will surround us and cut off our name from the earth. And what will You do for Your great name?”

So the Lord said to Joshua, “Rise up! Why is it that you have fallen on your face? Israel has sinned, and they have also transgressed My covenant which I commanded them.