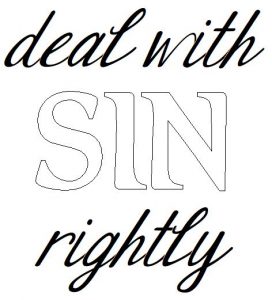 MATTHEW 18:15-18
If your brother sins, go and show him his fault in private; if he listens to you, you have won your brother. But if he does not listen to you, take one or two more with you, so that by the mouth of two or three witnesses every fact may be confirmed. If he refuses to listen to them, tell it to the church; and if he refuses to listen even to the church, let him be to you as a Gentile and a tax collector. Truly I say to you, whatever you bind on earth shall have been bound in heaven; and whatever you loose on earth shall have been loosed in heaven.

I CORINTHIANS 5:5
I have decided to deliver such a one to Satan for the destruction of his flesh, so that his spirit may be saved in the day of the Lord Jesus.

JAMES 5:19
My brethren, if any among you strays from the truth and one turns him back...

SCRIPTURE TEXT—JOSHUA 7:16-26
So Joshua arose early in the morning and brought Israel near by tribes, and the tribe of Judah was taken. He brought the family of Judah near, and he took the family of the Zerahites; and he brought the family of the Zerahites near man by man, and Zabdi was taken. He brought his household near man by man; and Achan, son of Carmi, son of Zabdi, son of Zerah, from the tribe of Judah, was taken. Then Joshua said to Achan, “My son, I implore you, give glory to the Lord, the God of Israel, and give praise to Him; and tell me now what you have done. Do not hide it from me.” So Achan answered Joshua and said, “Truly, I have sinned against the Lord, the God of Israel, and this is what I did: when I saw among the spoil a beautiful mantle from Shinar and two hundred shekels of silver and a bar of gold fifty shekels in weight, then I coveted them and took them; and behold, they are concealed in the earth inside my tent with the silver underneath it.”

So Joshua sent messengers, and they ran to the tent; and behold, it was concealed in his tent with the silver underneath it. They took them from inside the tent and brought them to Joshua and to all the sons of Israel, and they poured them out before the Lord. Then Joshua and all Israel with him, took Achan the son of Zerah, the silver, the mantle, the bar of gold, his sons, his daughters, his oxen, his donkeys, his sheep, his tent and all that belonged to him; and they brought them up to the valley of Achor. Joshua said, “Why have you troubled us? The Lord will trouble you this day.” And all Israel stoned them with stones; and they burned them with fire after they had stoned them with stones. They raised over him a great heap of stones that stands to this day, and the Lord turned from the fierceness of His anger. Therefore the name of that place has been called the valley of Achor to this day.