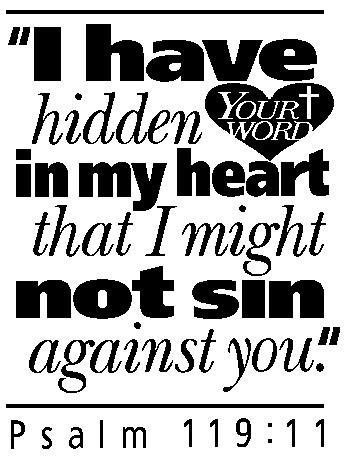 PSALM 119:9-11
How can a young man keep his way pure?
By keeping it according to Your word.
With all my heart I have sought You;
Do not let me wander from Your commandments.
Your word I have treasured in my heart,
That I may not sin against You.

Jesus, full of the Holy Spirit, returned from the Jordan and was led around by the Spirit in the wilderness for forty days, being tempted by the devil. And He ate nothing during those days, and when they had ended, He became hungry. And the devil said to Him, “If You are the Son of God, tell this stone to become bread.” And Jesus answered him, “It is written, ‘Man shall not live on bread alone.’”

And he led Him up and showed Him all the kingdoms of the world in a moment of time. And the devil said to Him, “I will give You all this domain and its glory; for it has been handed over to me, and I give it to whomever I wish. Therefore if You worship before me, it shall all be Yours.” Jesus answered him, “It is written, ‘You shall worship the Lord your God and serve Him only.’”

And he led Him to Jerusalem and had Him stand on the pinnacle of the temple, and said to Him, “If You are the Son of God, throw Yourself down from here; for it is written,

‘He will command His angels concerning You to guard You,’ and, ‘On their hands they will bear You up,
So that You will not strike Your foot against a stone.’”

And Jesus answered and said to him, “It is said, ‘You shall not put the Lord your God to the test.’”

When the devil had finished every temptation, he left Him until an opportune time.

And Jesus returned to Galilee in the power of the Spirit, and news about Him spread through all the surrounding district. And He began teaching in their synagogues and was praised by all.

“The Spirit of the Lord is upon Me,
Because He anointed Me to preach the gospel to the poor.
He has sent Me to proclaim release to the captives,
And recovery of sight to the blind,
To set free those who are oppressed,
To proclaim the favorable year of the Lord.”

And He closed the book, gave it back to the attendant and sat down; and the eyes of all in the synagogue were fixed on Him. And He began to say to them, “Today this Scripture has been fulfilled in your hearing.” And all were speaking well of Him, and wondering at the gracious words which were falling from His lips; and they were saying, “Is this not Joseph’s son?” And He said to them, “No doubt you will quote this proverb to Me, ‘Physician, heal yourself! Whatever we heard was done at Capernaum, do here in your hometown as well.’” And He said, “Truly I say to you, no prophet is welcome in his hometown. But I say to you in truth, there were many widows in Israel in the days of Elijah, when the sky was shut up for three years and six months, when a great famine came over all the land; and yet Elijah was sent to none of them, but only to Zarephath, in the land of Sidon, to a woman who was a widow. And there were many lepers in Israel in the time of Elisha the prophet; and none of them was cleansed, but only Naaman the Syrian.” And all the people in the synagogue were filled with rage as they heard these things; and they got up and drove Him out of the city, and led Him to the brow of the hill on which their city had been built, in order to throw Him down the cliff.

Topics: Jesus Christ, overcoming, sin, temptation
« Prepare The Way Of The Lord No Place Like Home »