- THIS IS A SPECIAL PASSION WEEK MESSAGE FROM PASTOR KYLE -

Jesus, therefore, six days before the Passover, came to Bethany where Lazarus was, whom Jesus had raised from the dead. 2 So they made Him a supper there, and Martha was serving; but Lazarus was one of those reclining at the table with Him. 3 Mary then took a pound of very costly perfume of pure nard, and anointed the feet of Jesus and wiped His feet with her hair; and the house was filled with the fragrance of the perfume. 4 But Judas Iscariot, one of His disciples, who was intending to betray Him, said, 5 “Why was this perfume not sold for three hundred denarii and given to poor people?” 6 Now he said this, not because he was concerned about the poor, but because he was a thief, and as he had the money box, he used to pilfer what was put into it. 7 Therefore Jesus said, “Let her alone, so that she may keep it for the day of My burial. 8 For you always have the poor with you, but you do not always have Me.”
9 The large crowd of the Jews then learned that He was there; and they came, not for Jesus’ sake only, but that they might also see Lazarus, whom He raised from the dead. 10 But the chief priests planned to put Lazarus to death also; 11 because on account of him many of the Jews were going away and were believing in Jesus.

First off, this story actually takes place the day before Jesus triumphal entry (Palm Sunday), but it bares great importance to all that’s taking place during the passion week. Also, this is one of those Gospel accounts, that in order to put the whole story together, you need to read where it’s recorded in the other Gospels as well. I’ll be referencing a couple of these other passages, but if you wish to read them fully, the references are Matthew 26:6-12 and Mark 14:3-9.

In Matthew’s and Mark’s account, they both bring out the important point that Mary had unknowingly anointed Jesus to prepare Him for burial (Matthew 26:12 & Mark 14:8). Though Jesus had warned His disciples several times before, they were not understanding that He must suffer and die. Jesus, however, knew exactly what had to happen, and His timing of entering Jerusalem just before the Passover would be no coincidence. Here, in the house of Simon the leper and with His friends and disciples, Mary performs an incredible act of pure worship that cost her 300 denarii (about a year’s wages) and course criticism from the disciples. However, it was exactly what the Father willed. As Jesus rebukes her critics, He informs them that this was done in preparation for what is to come, and that she would be remembered for it (Matthew 26:13). 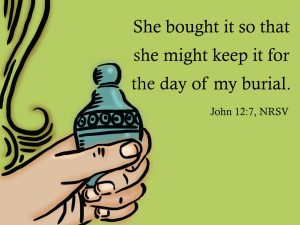 We often associate success with praise and recognition. Though there are times when doing the right thing can be praised and recognized, they can be false confirmations of doing the right or wrong thing. A close look at Scripture and church history are good indicators of that, and Jesus is the best example of all. Though many times He was recognized for His miracles and teachings, it was often because people were impressed by the show, or just liked the fact that He was helping fill their needs, or they thought that He would establish His earthly Kingdom now. In this last week before Jesus’ crucifixion, we’ll see Jesus’ approval rating hit the bottom, to the point that the religious leaders will stop at nothing in order to have Him put to death. However, like Mary’s criticized act of worship, all this will play part in God’s ultimate, sovereign plan of Salvation for you and me.