Passion Week: The Son of Man Must Be Lifted Up

- THIS IS A SPECIAL PASSION WEEK MESSAGE FROM PASTOR KYLE -

Passion Week: The Son of Man Must Be Lifted Up

Now there were some Greeks among those who were going up to worship at the feast; 21 these then came to Philip, who was from Bethsaida of Galilee, and began to ask him, saying, “Sir, we wish to see Jesus.” 22 Philip came and told Andrew; Andrew and Philip came and told Jesus. 23 And Jesus answered them, saying, “The hour has come for the Son of Man to be glorified. 24 Truly, truly, I say to you, unless a grain of wheat falls into the earth and dies, it remains alone; but if it dies, it bears much fruit. 25 He who loves his life loses it, and he who hates his life in this world will keep it to life eternal. 26 If anyone serves Me, he must follow Me; and where I am, there My servant will be also; if anyone serves Me, the Father will honor him.

27 “Now My soul has become troubled; and what shall I say, ‘Father, save Me from this hour’? But for this purpose I came to this hour. 28 Father, glorify Your name.” Then a voice came out of heaven: “I have both glorified it, and will glorify it again.” 29 So the crowd of people who stood by and heard it were saying that it had thundered; others were saying, “An angel has spoken to Him.” 30 Jesus answered and said, “This voice has not come for My sake, but for your sakes. 31 Now judgment is upon this world; now the ruler of this world will be cast out. 32 And I, if I am lifted up from the earth, will draw all men to Myself.” 33 But He was saying this to indicate the kind of death by which He was to die. 34 The crowd then answered Him, “We have heard out of the Law that the Christ is to remain forever; and how can You say, ‘The Son of Man must be lifted up’? Who is this Son of Man?” 35 So Jesus said to them, “For a little while longer the Light is among you. Walk while you have the Light, so that darkness will not overtake you; he who walks in the darkness does not know where he goes. 36 While you have the Light, believe in the Light, so that you may become sons of Light.”

In this passage, Jesus reveals many important things regarding what is about to happen, and what it truly means to be a follower of Christ.

As His crucifixion was soon approaching, some God fearing Greeks were trying to see Jesus. He took this opportunity to explain to them that He must die so that many could be saved through His sacrifice, and He used the illustration of a wheat cornel to help them understand. Whether or not they truly understood what He was saying at this time, these Greeks were in Jerusalem for the Passover, and many of them would likely see Jesus’ crucifixion in person. I can only imagine how this explanation from Jesus may have been racing through their minds as Jesus was lifted up on the cross to die just as He said, and even more so when some of them may have seen the resurrected Lord only a few days later.

In verse 27, Jesus gives us some insight to the spiritual, physical, and emotional hardship that He knew He would face. We also see that portrayed later when Jesus is praying in the garden (Luke 22:41-44). But He also knew that it was the very reason why He came to this earth to live as a man, and though it would be agonizingly hard, He carried through with the Father’s plan with great joy. Think about that for a moment? Jesus did all of this for us, so that if we would become “followers” of Christ, we could be saved from the punishment that each of us deserves. That’s the Savior we worship! 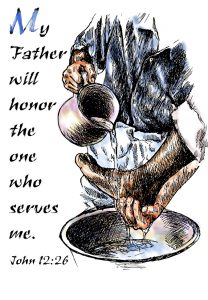 As we look forward to Easter, I encourage you to remember daily what Jesus has done for each of us, and how we can be living as true followers of His.

Praying for you all,