Prepare The Way Of The Lord 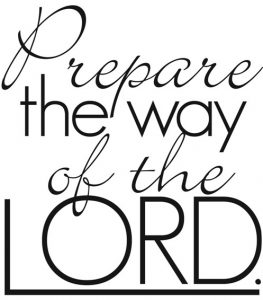 PREPARE THE WAY OF THE LORD

MATTHEW 3:1-2
Now in those days John the Baptist came, preaching in the wilderness of Judea, saying, “Repent, for the kingdom of heaven is at hand.”

SCRIPTURE TEXT—LUKE 3:1-20
Now in the fifteenth year of the reign of Tiberius Caesar, when Pontius Pilate was governor of Judea, and Herod was tetrarch of Galilee, and his brother Philip was tetrarch of the region of Ituraea and Trachonitis, and Lysanias was tetrarch of Abilene, in the high priesthood of Annas and Caiaphas, the word of God came to John, the son of Zacharias, in the wilderness. And he came into all the district around the Jordan, preaching a baptism of repentance for the forgiveness of sins; as it is written in the book of the words of Isaiah the prophet,

Now while the people were in a state of expectation and all were wondering in their hearts about John, as to whether he was the Christ, John answered and said to them all, “As for me, I baptize you with water; but One is coming who is mightier than I, and I am not fit to untie the thong of His sandals; He will baptize you with the Holy Spirit and fire. His winnowing fork is in His hand to thoroughly clear His threshing floor, and to gather the wheat into His barn; but He will burn up the chaff with unquenchable fire.”

So with many other exhortations he preached the gospel to the people. But when Herod the tetrarch was reprimanded by him because of Herodias, his brother’s wife, and because of all the wicked things which Herod had done, Herod also added this to them all: he locked John up in prison.

NEXT WEEK: OVERCOMING TEMPTATION - LUKE 3:21-4:13
Now when all the people were baptized, Jesus was also baptized, and while He was praying, heaven was opened, and the Holy Spirit descended upon Him in bodily form like a dove, and a voice came out of heaven, “You are My beloved Son, in You I am well-pleased.”

Jesus, full of the Holy Spirit, returned from the Jordan and was led around by the Spirit in the wilderness for forty days, being tempted by the devil. And He ate nothing during those days, and when they had ended, He became hungry. And the devil said to Him, “If You are the Son of God, tell this stone to become bread.” And Jesus answered him, “It is written, ‘Man shall not live on bread alone.’”

And he led Him up and showed Him all the kingdoms of the world in a moment of time. And the devil said to Him, “I will give You all this domain and its glory; for it has been handed over to me, and I give it to whomever I wish. Therefore if You worship before me, it shall all be Yours.” Jesus answered him, “It is written, ‘You shall worship the Lord your God and serve Him only.’”

And he led Him to Jerusalem and had Him stand on the pinnacle of the temple, and said to Him, “If You are the Son of God, throw Yourself down from here; for it is written, ‘He will command His angels concerning You to guard You,’ and, ‘On their hands they will bear You up, So that You will not strike Your foot against a stone.’”

And Jesus answered and said to him, “It is said, ‘You shall not put the Lord your God to the test.’”

When the devil had finished every temptation, he left Him until an opportune time.