The Cost of Discipleship 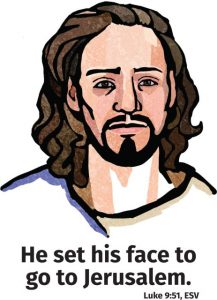 THE COST OF DISCIPLESHIP

THEME VERSE — Luke 19:10
For the Son of Man has come to seek and to save that which was lost.

James 4:4
You adulteresses, do you not know that friendship with the world is hostility toward God? Therefore whoever wishes to be a friend of the world makes himself an enemy of God.

Luke 9:23-25
And He was saying to them all, “If anyone wishes to come after Me, he must deny himself, and take up his cross daily and follow Me. For whoever wishes to save his life will lose it, but whoever loses his life for My sake, he is the one who will save it. For what is a man profited if he gains the whole world, and loses or forfeits himself?

SCRIPTURE TEXT
Luke 9:51-62
When the days were approaching for His ascension, He was determined to go to Jerusalem; and He sent messengers on ahead of Him, and they went and entered a village of the Samaritans to make arrangements for Him. But they did not receive Him, because He was traveling toward Jerusalem. When His disciples James and John saw this, they said, “Lord, do You want us to command fire to come down from heaven and consume them?” But He turned and rebuked them, and said, “You do not know what kind of spirit you are of; for the Son of Man did not come to destroy men’s lives, but to save them.” And they went on to another village.

As they were going along the road, someone said to Him, “I will follow You wherever You go.” And Jesus said to him, “The foxes have holes and the birds of the air have nests, but the Son of Man has nowhere to lay His head.” And He said to another, “Follow Me.” But he said, “Lord, permit me first to go and bury my father.” But He said to him, “Allow the dead to bury their own dead; but as for you, go and proclaim everywhere the kingdom of God.” Another also said, “I will follow You, Lord; but first permit me to say good-bye to those at home.” But Jesus said to him, “No one, after putting his hand to the plow and looking back, is fit for the kingdom of God.”

Now after this the Lord appointed seventy others, and sent them in pairs ahead of Him to every city and place where He Himself was going to come. And He was saying to them, “The harvest is plentiful, but the laborers are few; therefore beseech the Lord of the harvest to send out laborers into His harvest. Go; behold, I send you out as lambs in the midst of wolves. Carry no money belt, no bag, no shoes; and greet no one on the way. Whatever house you enter, first say, ‘Peace be to this house.’ If a man of peace is there, your peace will rest on him; but if not, it will return to you. Stay in that house, eating and drinking what they give you; for the laborer is worthy of his wages. Do not keep moving from house to house. Whatever city you enter and they receive you, eat what is set before you; and heal those in it who are sick, and say to them, ‘The kingdom of God has come near to you.’ But whatever city you enter and they do not receive you, go out into its streets and say, ‘Even the dust of your city which clings to our feet we wipe off in protest against you; yet be sure of this, that the kingdom of God has come near.’ I say to you, it will be more tolerable in that day for Sodom than for that city.

“Woe to you, Chorazin! Woe to you, Bethsaida! For if the miracles had been performed in Tyre and Sidon which occurred in you, they would have repented long ago, sitting in sackcloth and ashes. But it will be more tolerable for Tyre and Sidon in the judgment than for you. And you, Capernaum, will not be exalted to heaven, will you? You will be brought down to Hades!