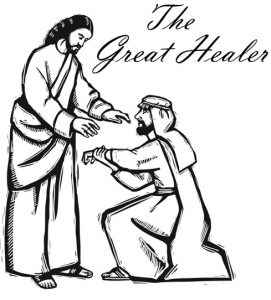 JOHN 20:30-31
Therefore many other signs Jesus also performed in the presence of the disciples, which are not written in this book; but these have been written so that you may believe that Jesus is the Christ, the Son of God; and that believing you may have life in His name.

SCRIPTURE TEXT—LUKE 4:31-44
And He came down to Capernaum, a city of Galilee, and He was teaching them on the Sabbath; and they were amazed at His teaching, for His message was with authority. In the synagogue there was a man possessed by the spirit of an unclean demon, and he cried out with a loud voice, “Let us alone! What business do we have with each other, Jesus of Nazareth? Have You come to destroy us? I know who You are—the Holy One of God!” But Jesus rebuked him, saying, “Be quiet and come out of him!” And when the demon had thrown him down in the midst of the people, he came out of him without doing him any harm. And amazement came upon them all, and they began talking with one another saying, “What is this message? For with authority and power He commands the unclean spirits and they come out.” And the report about Him was spreading into every locality in the surrounding district.

Then He got up and left the synagogue, and entered Simon’s home. Now Simon’s mother-in-law was suffering from a high fever, and they asked Him to help her. And standing over her, He rebuked the fever, and it left her; and she immediately got up and waited on them.

While the sun was setting, all those who had any who were sick with various diseases brought them to Him; and laying His hands on each one of them, He was healing them. Demons also were coming out of many, shouting, “You are the Son of God!” But rebuking them, He would not allow them to speak, because they knew Him to be the Christ.

When day came, Jesus left and went to a secluded place; and the crowds were searching for Him, and came to Him and tried to keep Him from going away from them. But He said to them, “I must preach the kingdom of God to the other cities also, for I was sent for this purpose.”

So He kept on preaching in the synagogues of Judea.

Now it happened that while the crowd was pressing around Him and listening to the word of God, He was standing by the lake of Gennesaret; and He saw two boats lying at the edge of the lake; but the fishermen had gotten out of them and were washing their nets. And He got into one of the boats, which was Simon’s, and asked him to put out a little way from the land. And He sat down and began teaching the people from the boat. When He had finished speaking, He said to Simon, “Put out into the deep water and let down your nets for a catch.” Simon answered and said, “Master, we worked hard all night and caught nothing, but I will do as You say and let down the nets.” When they had done this, they enclosed a great quantity of fish, and their nets began to break; so they signaled to their partners in the other boat for them to come and help them. And they came and filled both of the boats, so that they began to sink. But when Simon Peter saw that, he fell down at Jesus’ feet, saying, “Go away from me Lord, for I am a sinful man!” For amazement had seized him and all his companions because of the catch of fish which they had taken; and so also were James and John, sons of Zebedee, who were partners with Simon. And Jesus said to Simon, “Do not fear, from now on you will be catching men.” When they had brought their boats to land, they left everything and followed Him.

Topics: be healed, healing, Jesus Christ
« No Place Like Home Fishers Of Men »