The Rich Man And Lazarus 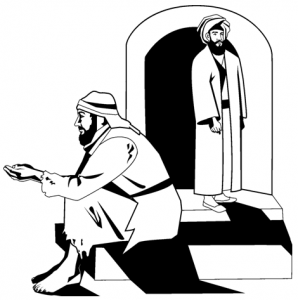 THE RICH MAN AND LAZARUS

MARK 8:34-38
And He summoned the crowd with His disciples, and said to them, “If anyone wishes to come after Me, he must deny himself, and take up his cross and follow Me. For whoever wishes to save his life will lose it, but whoever loses his life for My sake and the gospel’s will save it. For what does it profit a man to gain the whole world, and forfeit his soul? For what will a man give in exchange for his soul? For whoever is ashamed of Me and My words in this adulterous and sinful generation, the Son of Man will also be ashamed of him when He comes in the glory of His Father with the holy angels.”

SCRIPTURE TEXT - LUKE 16:19-31
“Now there was a rich man, and he habitually dressed in purple and fine linen, joyously living in splendor every day. And a poor man named Lazarus was laid at his gate, covered with sores, and longing to be fed with the crumbs which were falling from the rich man’s table; besides, even the dogs were coming and licking his sores. Now the poor man died and was carried away by the angels to Abraham’s bosom; and the rich man also died and was buried. In Hades he lifted up his eyes, being in torment, and saw Abraham far away and Lazarus in his bosom. And he cried out and said, ‘Father Abraham, have mercy on me, and send Lazarus so that he may dip the tip of his finger in water and cool off my tongue, for I am in agony in this flame.’ But Abraham said, ‘Child, remember that during your life you received your good things, and likewise Lazarus bad things; but now he is being comforted here, and you are in agony. And besides all this, between us and you there is a great chasm fixed, so that those who wish to come over from here to you will not be able, and that none may cross over from there to us.’ And he said, ‘Then I beg you, father, that you send him to my father’s house— for I have five brothers—in order that he may warn them, so that they will not also come to this place of torment.’ But Abraham said, ‘They have Moses and the Prophets; let them hear them.’ But he said, ‘No, father Abraham, but if someone goes to them from the dead, they will repent!’ But he said to him, ‘If they do not listen to Moses and the Prophets, they will not be persuaded even if someone rises from the dead.’”

He said to His disciples, “It is inevitable that stumbling blocks come, but woe to him through whom they come! It would be better for him if a millstone were hung around his neck and he were thrown into the sea, than that he would cause one of these little ones to stumble. Be on your guard! If your brother sins, rebuke him; and if he repents, forgive him. And if he sins against you seven times a day, and returns to you seven times, saying, ‘I repent,’ forgive him.”

The apostles said to the Lord, “Increase our faith!” And the Lord said, “If you had faith like a mustard seed, you would say to this mulberry tree, ‘Be uprooted and be planted in the sea’; and it would obey you.

“Which of you, having a slave plowing or tending sheep, will say to him when he has come in from the field, ‘Come immediately and sit down to eat’?

Then Jesus declared, “I am the bread of life. Whoever comes to me will never go hungry, and whoever believes in me will never be thirsty.”
John 6:35