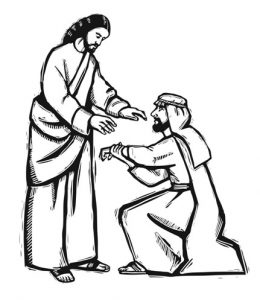 MATTHEW 12:1-14
At that time Jesus went through the grainfields on the Sabbath, and His disciples became hungry and began to pick the heads of grain and eat. Now when the Pharisees saw this, they said to Him, “Look, Your disciples are doing what is not lawful to do on a Sabbath!” But He said to them, “Have you not read what David did when he became hungry, he and his companions— how he entered the house of God, and they ate the consecrated bread, which was not lawful for him to eat nor for those with him, but for the priests alone? Or have you not read in the Law that on the Sabbath the priests in the temple violate the Sabbath, and yet are innocent? But I say to you that something greater than the temple is here. But if you had known what this means: ‘I desire compassion, rather than sacrifice,’ you would not have condemned the innocent.

For the Son of Man is Lord of the Sabbath.”

Departing from there, He went into their synagogue. And a man was there whose hand was withered. And they questioned Jesus, asking, “Is it lawful to heal on the Sabbath?”—so that they might bring charges against Him. But He said to them, “What man is there among you who has a sheep, and if it falls into a pit on the Sabbath, will he not take hold of it and lift it out? How much more valuable then is a person than a sheep! So then, it is lawful to do good on the Sabbath.” Then He *said to the man, “Stretch out your hand!” He stretched it out, and it was restored to normal, like the other. But the Pharisees went out and conspired against Him, as to how they might destroy Him.

SCRIPTURE TEXT - LUKE 14:1-6
It happened that when He went into the house of one of the leaders of the Pharisees on the Sabbath to eat bread, they were watching Him closely. And there in front of Him was a man suffering from edema. And Jesus responded and said to the lawyers and Pharisees, “Is it lawful to heal on the Sabbath, or not?” But they kept silent. And He took hold of him and healed him, and sent him away. And He said to them, “Which one of you will have a son or an ox fall into a well, and will not immediately pull him out on a Sabbath day?” And they could offer no reply to this.

Now He began telling a parable to the invited guests when He noticed how they had been picking out the places of honor at the table, saying to them, “Whenever you are invited by someone to a wedding feast, do not take the place of honor, for someone more distinguished than you may have been invited by him, and the one who invited you both will come and say to you, ‘Give your place to this person,’ and then in disgrace you will proceed to occupy the last place. But whenever you are invited, go and take the last place, so that when the one who has invited you comes, he will say to you, ‘Friend, move up higher’; then you will have honor in the sight of all who are dining at the table with you. For everyone who exalts himself will be humbled, and the one who humbles himself will be exalted.”

Now He also went on to say to the one who had invited Him, “Whenever you give a luncheon or a dinner, do not invite your friends, your brothers, your relatives, nor wealthy neighbors, otherwise they may also invite you to a meal in return, and that will be your repayment. But whenever you give a banquet, invite people who are poor, who have disabilities, who are limping, and people who are blind; and you will be blessed, since they do not have the means to repay you; for you will be repaid at the resurrection of the righteous.”