When Right is Wrong and Wrong is Right 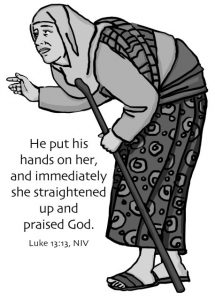 WHEN RIGHT IS WRONG AND WRONG IS RIGHT

MATTHEW 23:23-28
“Woe to you, scribes and Pharisees, hypocrites! For you tithe mint and dill and cumin, and have neglected the weightier provisions of the Law: justice and mercy and faithfulness; but these are the things you should have done without neglecting the others. You blind guides, who strain out a gnat and swallow a camel!

“Woe to you, scribes and Pharisees, hypocrites! For you are like whitewashed tombs which on the outside appear beautiful, but inside they are full of dead men’s bones and all uncleanness. So you too, outwardly appear righteous to people, but inwardly you are full of hypocrisy and lawlessness.

MICAH 6:8
He has told you, mortal one, what is good;
And what does the Lord require of you
But to do justice, to love kindness,
And to walk humbly with your God?

SCRIPTURE TEXT - LUKE 13:10-17
Now Jesus was teaching in one of the synagogues on the Sabbath. And there was a woman who for eighteen years had had a sickness caused by a spirit; and she was bent over double, and could not straighten up at all. When Jesus saw her, He called her over and said to her, “Woman, you are freed from your sickness.” And He laid His hands on her; and immediately she stood up straight again, and began glorifying God. But the synagogue leader, indignant because Jesus had healed on the Sabbath, began saying to the crowd in response, “There are six days during which work should be done; so come during them and get healed, and not on the Sabbath day.” But the Lord answered him and said, “You hypocrites, does each of you on the Sabbath not untie his ox or donkey from the stall and lead it away to water it? And this woman, a daughter of Abraham as she is, whom Satan has bound for eighteen long years, should she not have been released from this restraint on the Sabbath day?” And as He said this, all His opponents were being humiliated; and the entire crowd was rejoicing over all the glorious things being done by Him.

So He was saying, “What is the kingdom of God like, and to what shall I compare it? It is like a mustard seed, which a man took and threw into his own garden; and it grew and became a tree, and the birds of the sky nested in its branches.”

And again He said, “To what shall I compare the kingdom of God? It is like leaven, which a woman took and hid in three sata of flour until it was all leavened.”

Topics: Christian living, healing, Jesus Christ, restoration, truth
« We Are Living on Borrowed Time What is the Kingdom of God Like? »

Whoever loves discipline loves knowledge, but whoever hates correction is stupid.
Proverbs 12:1